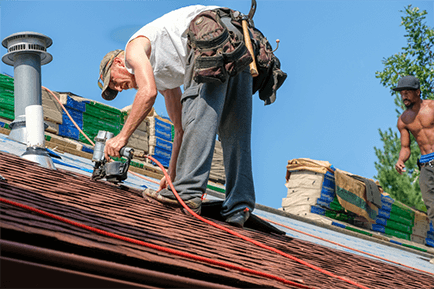 Things a Professional Roofing Contractor would not make

Roof repair is something that is subjected to a lot of misconceptions.  For example, a lot of people thing that the roof can be repaired without any help.  However, this is not true. Doing such repair work without any such professional help can lead to a number of mistakes. In the following post, we are going to take a look at some of the most common mistakes that can happen while repairing roof shingles.

Homeowners often make mistakes, often unknowingly, when they make routine repairs to their roof. Recognizing the problems and correcting them can keep your roof in the best condition

Loose nails and fasteners that keep the roof deck together and the shingle roofing adhered to the deck can be a sign of improper installation. They can pierce the shingles and damage them.  You need to remove the loose or mislaid nails and replace them with new.  You should use up to six nails per shingle, laid right under the seal-down strip of the shingle. You should also replace cracked or chipped shingles at this time.

Going for shingle roofing that has a continuous seal-down strip can lead to leaks. Instead, go for a shingle product that has breaks in the adhesive between each of the strips. This would prohibit water from seeping under the shingle. When you are repairing roofs with valleys, ensure that you add flashing at the angle to prevent water damage.

Metal flashing is generally used to stop water from seeping in around chimneys, valleys, windows and skylights. However, misplaced flashing can often create leaks. Chimney flashing must be set right into mortar to be useful. Repairing them with caulk is a common mistake that you should avoid. Misalignment of step flashing is also a common mistake. Flashing pieces should overlap approximately 2 inches and they should be fastened with just one nail in the upper corner.

Contact a reliable roofing contractors San Jose as they would be able to avoid such mistakes and install the roofing in the most effective way.